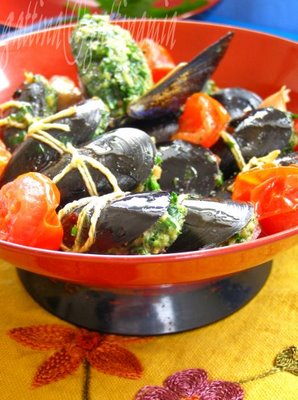 Hongkong has many beaches and bays that used to be so clean that people could cultivate oysters and dig for mussels, now it's a history since the city has over-developed. But suprisingly, I saw fishing for shrimp in indoor tank when I went back home last year. You may expect to see Caribbean-style interior... errr... no, you only found graffiti on cement walls, foldable plastic chairs lined along the tank (it's half of the size of a standard swimming pool) and speakers at four corners blasting pop songs. This place was very popular by young people. They came in, took their seats, fishing for 2 or 3 hours, no talking loud or bounching around, just very quiet! I was glad that they found an oasis probably not in this city but at least in their heart. That day I caught no shrimp... these mussels weren't from that tank either ... they're bought from a store yesterday and then transformed to another beautiful dish simply by adding fresh vegetable and herb. I hope you'll enjoy it as much as I do! Recipe for mussels with Swiss chard and Italian parsley (yield for 2 servings as the main course) 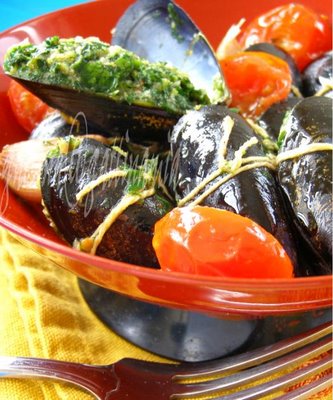 These looks awesome, I love mussels but not the rest of my family :(.

Yummmm! That is heavenly looking. It reminds me a little of Oysters Rockefeller, with the lovely green "stuffing" on top. I love mussels, but often find it hard to get nice ones. Beautiful pictures!!!

These looks so yummy! I wish Im really ur neighbour now, since we've so many similar taste for food! *wink*

That looks so yummmm! I love mussels.

your mussels remember me colors and smells of our seas. Bravissima!

Love the swiss chard peeking out of the mussels!! Very creative!!:)

Edith, I understand, that's why I always cook one single portion :D

Sher, did I hear oyster (I need a bib now!) I don't often see very fresh shellfish here either (I grew up with eating freshly-caught seafood, so I'm very picky on that)

archana, thank you, the black color does look good on red.

Grace, my hubby also makes a good neighbor with yours, he also doesn't care about mussels.

Francesca, gracie! This dish does have a taste of Italy :)

Mussels are so easy to make, but most people don't realize that. These look great! I'm actually having mussels tonight, I like mine on the half shell with butter and a little hot sauce!

Yummm! That would be great with a ice cold pilsner.

This is interesting.. we stuff mussels with rice and coconut.. just made them the other day and am too lazy to do the detailed write up as yet.I love mussels, so another one for me to try. where do u get ur mussels from?

Brilynn, what a lovely dinner plan! I just love mussels regardless how you prepare them, actually I crazy for any shellfish.

Burcu, how I couldn't realize that?! I did have a glass of white wine went with them though.

Shaheen, please let me know when you make your mussels in the future, love to see your version!
I got these from a fish market (actually which is only a store) in the neighborhood area. I used to buy frozen ones imported from New Zealand (since the Asian store carries them), but they're pretty large which is too much for a mouthful for this dish.

oh yummmm! that sounds like a dish which just bursts with flavors!

Lovely, just lovely! I'll be keeping this recipe as Hubbs is the biggest mussels fan I know =)

Oh yum! Delicious Gattina! I love mussels! I will keep this recipe to try.

MMMHHHH! you're wonderful!!!I have to cook mussels too! very tasty recipe!

They look just fantastic. I love mussels, but they're hard to get here, too far from the ocean. I just cut all my swiss chard in the garden yesterday, but I left the stems in the ground just to see if any more will grow before it freezes.

Nabeela, you're so right! Thanks!

Saffron, thanks for your compliement!

Kalyn, it is the thing I can't do... growing my own veg (as I live in a rental house). But I enjoy so much seeing your and others!

The mussels looks so delicious. I can't wait to try them.

omg, these are mouth watering!! I love mussels :)

I'm late but I just want to tell you that this looks so pretty and beautiful that I almost would eat them all despite my mussel allergy! Wonderful gattina-you are so talented!