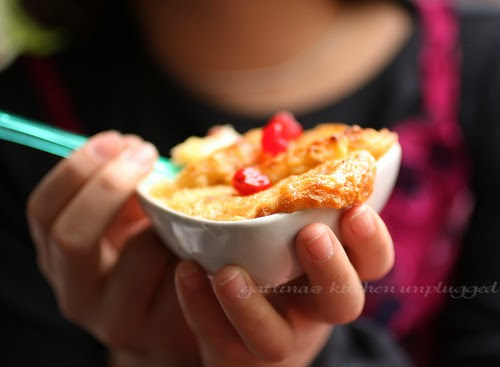 Sorry my last post has left the question open. To order chocolate milk in Barcelona, I just ask for 'Cacaolat' (it's actually a manufacturer's name but its chocolate milk is distributed at all cafes). Or 'Batido de cacao', which is a description of this beverage, should be work too. But I surely will also try all of your suggestions next time, thank YOU! I have quite a few friends who are a guy, and single. Their refrigerators are pretty deserted ... unless you count the pickles (been open but sitting there for 2 years) and packs of juice (expire date is 2006...) are food. But one thing they have in common, they always stock up fresh milk and egg (as long as I don't see the chicks hopping I guess the eggs are still fresh huh...). Many time our fridges are also such a desert, aren't they?
Good news is, we all are able to make bread and milk pudding anytime.
Please don't ask me why I look in their fridge... I would be a horrible girlfriend if I was single, the men had to knock their stuff in a safe... 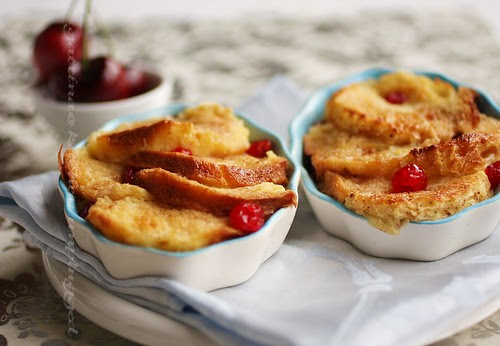 I always eat brioche at home so it is what I have plenty. In my opinion, it is used in a regular bread & milk pudding's recipe, the flavor doesn't pop out. Therefore, I have added some marmalade, almond milk, some dried fruit and ground almond to create multi-layers of flavor, the pudding becomes more interesting to me.

I eyeballed everything and baked the pudding in some single-serving ceramic dishes. The following is only a guideline.

Posted by Gattina Cheung at 8:38 AM

Your pics are gorgeous and making me drool. So many mouth watering pastry and cakes!

This is such a comforting and delicious dessert to have...my grandma puts mango jam in hers for flavor :)

The addition of almond milk and marmalade sounds wonderful!

LOL @ Eggs and chicks. Yeah, they must be fresh if you don't want Salmonella poisoning!
My fridge is always overflowing as always! ;D

Pudding looks wonderful, yet to try my hand at Brioche at home. Just posted a Asiago bread and savory French toast, peek in when you can!:)

2 types of milks, 2 types of sugar ..... my 2 eyeballs almost popped out! I really admire your creativity!

Thank you for this versatile recipe. Wow, marmalade and almond milk are amazing additions, which definitely would add another dimension to the dish!

I love almond sweets. Thank you for the recipe. The pictures are incredible!

I think if you baked this for your single friends...they wouldn't mind so much your refrigerator peeping!

If you don't have a middle name, let you give you one: wickedness! LOL

You have me drooling so badly!