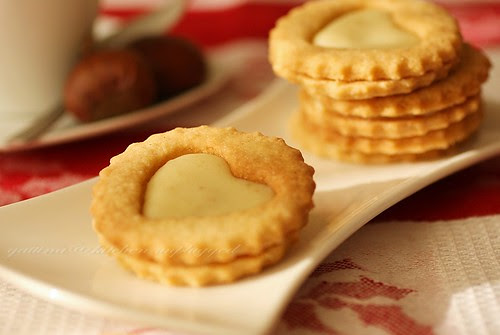 Is chestnut a part of your childhood memory?

For me, definitely. When I was a kid, there was no chocolate or cookies at home, we mostly snacked on nuts, bananas or sweet potatoes. In the late summer or fall when chestnuts were readily available, my mom would cooked them in simmering water.

Roasted chestnuts were for those people owned a fireplace or oven, most of us back then had neither one :)

But the street vendors created one "roaster" - a giant barrel or wok (5' or 160cm- wide) was filled with steel beans. After it's heated up, the vendor added in chestnuts, then kept stirring (or shovelling) the whole content with a shovel. The result was, every single chestnut would be evenly "roasted". I call it the art of labor.

After I moved out of Hongkong, I didn't come across any impressive scene about chestnuts until this year...

Two weeks ago in our neighborhood area there were a few fiestas related to chestnuts. Last week I saw a little girl dress up as a chestnut cook at a Halloween party.

To keep this chestnut sentiment going, I specially made some chestnut-based cream, the chocolate in here only helps to solidify without interfere the flavor. But since the chestnuts hold some moisture so the cookies are preferably harder.

What beautiful cookies! A great combination of flavors! Delightful!

Gattina this looks lovely. I love the flavor of chestnut - funnily though I have often used it in savory recipes! I should try out these!

That sounds heavenly Gattina! The season for roasted chestnuts (in those very same "roasters"!) has started here and I'm looking forward to sampling them :)

I luv chestnut but never use it to make cream. I am drooling looking at the photos. AWESOME shots!

I've never tasted chestnut cookies before, but from your writeup and pictures, they do sound wonderful!:)

these look so good! i love chestnuts. I've never thought about combining it with white chocolate - what a lovely idea! i'll bet they're tasty!!!

White chocolate is such a beautiful thing to pair with Chestnuts.
These look fantastic.

There was a vendor roasting Chestnuts at the foot of the Spanish Steps when I went to Rome earlier this year.

Yes... chestnuts are part of my childhood and I just love them. In Italy you eat a lot of roasted and boiled chestnuts in November, they are so good. I miss chestnuts so much here in Sweden... they import them from Italy and France and it is very difficult to find them...
Very nice this cream.
Ciao.
Orchidea
www.viaggiesapori.blogspot.com

The only time I ever eat chestnut is when I buy a bag of hot nuts from a street vendor in New York City -- something I have loved to do since childhood. I never use the chestnut flavor in any baked goods, but I absolutely should.

Gorgeous! They look so yummy and delicious! :)

Hi, I am Tennen-Perman,E-mail from Japan.
I visited your site sometimes so far.
You have a cool site.
I linked your site in my blog.
I administer a blog talking about cooking.
Please link to my site in your ones if you like it.

What an wonderful idea! we are far from chestnut season here in Aus, but I gotta remember to make your cookies when the time comes. :)

No, fortunately it is not part of my child or adulthood :) but things can always change, especially with the cookies you have made here :)

I have never tried chestnut purée, Gattina, but these are making me drool! So beautiful, delicate...

Hi Gattina, those cookies look so delicious. The filling looks so interetsing and you make it seem easy too. Nice pics. Cheers!

Hey I too tried baking cup cakes and fairy cakes just after my exams got over. I go weak in the knees with a mention of muffins and cookies.