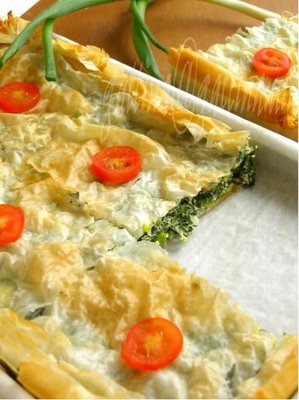 Next weekend will mark the first anniversary of Weekly Herb Blogging, Kalyn, WHB's founder, invites us "coming" over to her Kalyn Kitchen and sharing our dishes that feature our very favorite herb, then she'll tabulate results and announce the most preferred herb! C'mon over and have some fun! Ok back to this week of WHB, I feature scallion (or spring onion called by some British) in western cooking ... psst! I'm gonna use it in a traditional Chinese snack next week. 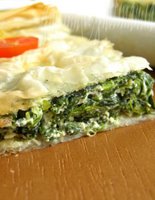 Scallion always reminds me my two aunts, my mom's sisters. One is a hard-cored herb eater... coriander soup (coriander + broth, that is!), meat buried in a pound of sauted scallion, etc; while the other would scream at the top of her lung once my grandma started peeling garlic! So on the dining table there were always two opposite camps of dishes. I had no intention to sterile my taste buds, ok, let me take a bit of sauted scallion then ... mmm, where's that harsh spicyness (when it's raw, to me anyway)?? What's now warming my palate was a mild onion-y aroma yet distinctive sweetness! So ever since... look my scallion pie and pizza on the sidebar, I don't need to elaborate how I love this herb :)

Recipe for scallion, spinach & ricotta pie (yield for 6 - 8 people as a starter)

Posted by Gattina Cheung at 4:15 AM

Ok, I'm racking my brain to think what might be a traditional Chinese snack with scallions. In Utah these are called "green onions". I love them. My mom used to eat them raw, dipped in a bit of salt. The tart sounds better to me! Looks delicious.

Gattina, this looks so delicious!

Jolene, thank you. You're working on your site, I guess?

Orchidea, I'll look forward to your delicious food that made from phyllo soon :)

Gattina, you're into phyllo sheets nowadays :) That's a yummy pie you've got there.

Oh, I love that picture!! This is the perfect thing for phyllo, always yummy! And, they are telling us that frozen spinach is safe. I was just thinking today that I should buy a few boxes of it and use that in a dish. Well, here you are with the perfect recipe!

Love the look of this pie. And I love all the ingredients! I would like to try your filling in those little phyllo cups on some friends next weekend - I think they would love it! :D

does frozen spinach taste the same while baking?i am torn between ur and nabeela's baking recipes.. what to do first?:)

Only the link is created, no posting yet. Before I do any posting, I think I need to take up some photography lessons from you first, hehe *wink*

Angie, Sher, Lis and Jolene, thank you so much for all your kind words!

Shaheen, if you use fresh spinach even better, but I just don't know how much you should use though.

This looks so very very good.